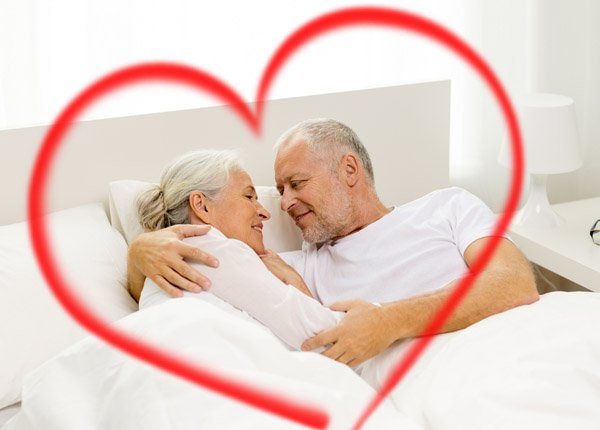 Ninety-three-year-old actress Betty White loves to talk about sex: “I may be a senior, but so what? I’m still hot.”

Most likely she’d applaud the recent research published in The Archives of Sexual Behavior that busts the stereotype of the sexless older adult.

While most of us know that the frequency of sex is greatest during those first throes of passion, and we grudgingly accept the fact that it often wanes as the years of wedded bliss march on, this study into the sexual behavior of long-married couples uncovered something quite unexpected. Couples who were married for longer than 50 years actually reported a slight uptick in their sex lives. In fact, the frequency of their sex lives continued to increase even after the 50-year mark.

The study examined trends in the frequency of sex of older adults.

Researchers analyzed information about aspects of well-being from over 1,600 couples aged 57 to 85 who had been married varying amounts of time, based on data from the 2005-2006 National Social Life, Health and Aging Project.

If you’ve ever wondered (and who hasn’t?) how often other people are “doing it,” here’s how the numbers played out: The average older adult who had been married for a year had a 65 percent chance of having sex two to three times a month (or more); after 25 years of marriage, that frequency was likely to drop to 40 percent. After being married for 50 years, it dropped further to 35 percent.

But—and here’s the real surprise—when couples remained together after 65 years, the chance of having sex with that frequency actually improved, and increased to 42 percent.

Samuel Stroope, the study’s lead author and an assistant professor of sociology at Louisiana State University, said that sexual frequency doesn’t return to two to three times a month, but moves in that direction as the years march on.

While this study’s findings are contrary to popular opinion or beliefs, they should not be taken without some caveats. Information published in The New York Times revealed that the study did not include partners who lived together but were not married, nor did it include gay or lesbian couples. And, interviewers told interviewees that the “sex” or “sexual activity” did not necessarily mean intercourse or orgasm but rather “any mutually voluntary activity with another person that involves sexual contact.”

No one truly knows.

Keep in mind that this study examined trends. Some couples were not having sex at all, and some were even having it daily.

But isn’t it nice to know that some older couples can still look into each other’s eyes, blind to the physical changes that occur over the years, buoyed by the closeness and years of togetherness, and still want to be sexually intimate with one another?