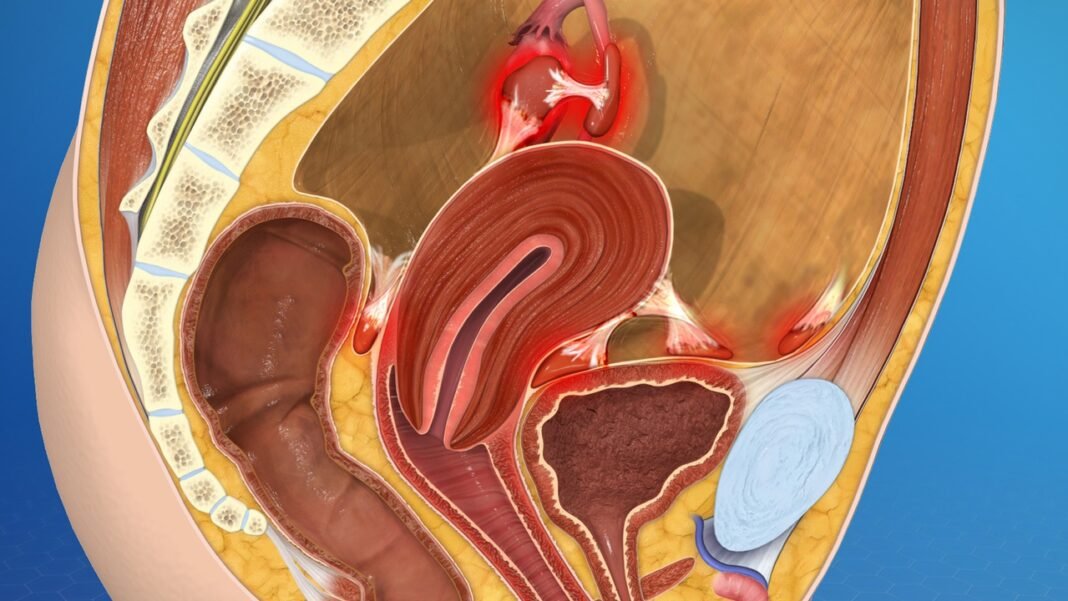 Endometriosis is a noncancerous condition in which tissue similar to the endometrium (uterine lining) grows outside your uterus and adheres to other structures, most commonly in the pelvis, such as on the ovaries, bowel, fallopian tubes or bladder. Rarely it implants in other places, such as the liver, lungs, diaphragm and surgical sites.

It is a common cause of pelvic pain and infertility. It affects about 5 million women in the United States.

Historically thought of as a disease that affects adult women, endometriosis is increasingly being diagnosed in adolescents, as well.

The most common symptoms are painful menstrual periods and/or chronic pelvic pain.

It is important to understand that other conditions aside from endometriosis can cause any or all of these symptoms and other causes may need to be ruled out. These include, but are not limited to, interstitial cystitis, irritable bowel syndrome, inflammatory bowel disease, pelvic adhesions (scar tissue), ovarian masses, uterine abnormalities, fibromyalgia, malabsorption syndromes and, very rarely, malignancies.

Gynecologists and reproductive endocrinologists, gynecologists who specialize in infertility and hormonal conditions, have the most experience in evaluating and treating endometriosis.

The condition can be very difficult to diagnose, however, because symptoms vary so widely and may be caused by other conditions.

Among the ways doctors diagnose the disease are:

Laparoscopy. Currently, laparoscopy is the gold standard for the diagnosis of endometriosis and is commonly used for both diagnosis and treatment. Performed under general anesthesia, the surgeon inserts a miniature telescope called a laparoscope through a small incision in the navel to view the location, size and extent of abnormalities (such as adhesions) in the pelvic region.

However, merely looking through the laparoscope can’t diagnose deep endometriosis disease, in which the endometrial tissue is hidden inside adhesions or underneath the lining of the abdominal cavity. More extensive dissection is needed to diagnose and treat this type of disease.

Many women have a combination of both deep and superficial (in which the endometrial tissue can be easily seen) endometrial disease.

Peritoneal tissue biopsy. During the laparoscopy, the doctor may remove a tiny piece of peritoneal tissue (the inner layer of the lining of the abdominal cavity) or other suspicious areas to help establish the diagnosis of endometriosis. This is recommended by the American College of Obstetricians and Gynecologists (ACOG), which notes that only an experienced surgeon familiar with the appearance of endometriosis should rely on visual inspection alone to make the diagnosis. A biopsy, however, is not mandatory to diagnose endometriosis, and a negative biopsy does not rule out the presence of this disease in other areas within the abdomen.

Ultrasonography, MRI and CT scan. An ultrasound uses sound waves to visualize the inside of your pelvic region, while an MRI uses magnets and a CT scan uses radiation. While these tests can occasionally suggest endometriosis, particularly ovarian endometriotic cysts called “endometrioma,” or rule out other conditions, none can definitively confirm the condition.

At this point, there is no established noninvasive method to diagnosis endometriosis, which is frustrating for both women and their health care providers.

Pelvic exam. Your doctor will perform a physical examination, including a pelvic exam, to aid in the evaluation. The examination will not diagnose endometriosis but may allow your doctor to feel nodules, areas of tenderness or masses on the ovaries that may suggest endometriosis.

Medical history. A detailed medical history may offer your health care professional the earliest clues in making the correct diagnosis.

There is no universal cure for endometriosis. However, there are a number of options available for treating and managing the disease after diagnosis. They fall into four categories: medical, surgical, alternative treatments and pregnancy.

If endometriosis has caused infertility, you have several treatment options, including surgery, drugs to stimulate ovulation, typically administered with intrauterine insemination or in vitro fertilization. The appropriate approach would be based on the results of a complete evaluation including an assessment of the male partner. In general, medicines that suppress the painful symptoms of endometriosis, such as GnRH agonists, oral contraceptives and danazol, do not improve the likelihood of pregnancy. The only possible exception would be that the use of a course of GnRH agonists before in vitro fertilization may improve outcomes in certain endometriosis patients, according to several recent studies.

There is no known way to prevent endometriosis. However, some health care professionals believe there might be a certain level of protection against the disease if you begin having children early in life and have more than one child.

Additionally, you may prevent or delay the development of endometriosis with an early diagnosis and treatment of any menstrual obstruction, a condition in which a vaginal cyst, vaginal tumor or other growth or lesion prevents endometrial tissue from leaving your body during menstruation.

There also is some evidence that long-term birth control pill users are less likely to develop endometriosis.